What is so special about Ramune soda?

A popular drink that reminds the feeling of local Japanese summertime, original ramune flavour is a fan favorite worldwide. Now replicated and made by different companies, Japanese Ramune soda comes in various flavors and is easier to find in other countries like the United Kingdom. It’s a soda that soft drink fans worldwide need to try today, from its distinctive codd neck bottle design to its fruity flavors.

The History of Ramune Soda

The name “Ramune” is from the English word“lemonade,” but it doesn’t taste quite alike lemon soda, nor does it taste like clear, lemon lime soft drinks Sprite or 7-Up, though the flavor is similar. Classic ramune tastes like ramune, which is why there are also ramune-flavored candies, with the flavor immediately recognizable. Today, a wide range of flavors are available, such as melon, strawberry, and more.

While ramune has become unmistakably Japanese, it originally was not a Japanese creation. Scottish-born pharmacist Alexander Cameron Sim created the drink while living in Kobe foreign settlement. The first place in the country where foreigners and Japanese lived side by side. According to A Victorian Sailor’s Grave in the Seto Island Sea, Sim based his carbonated beverage on lemonade. The drink was released in Kobe’s international community in 1884 with its now iconic bottle design.

After introducing ramune was endorsed as the prevention against cholera in the Tokyo Mainichi Shimbun newspaper. This gained popularity across the country and quickly became a fixture in Japan, appearing in Japanese restaurants and pubs. 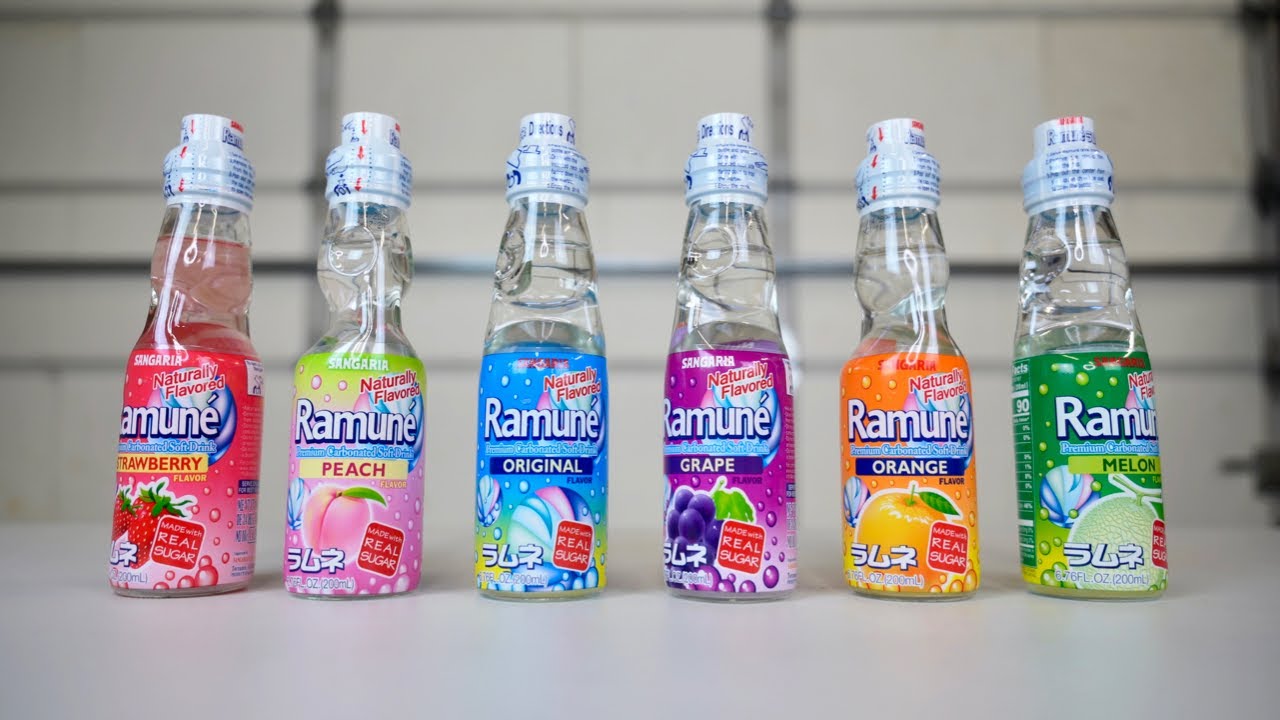 Ramune is a name for a carbonated soft drink with a unique codd bottle design. Although the old-fashioned bottle design is not a Japanese invention, Japan has an amazing way of keeping the past alive with a hint of nostalgia that will surely live on for a long time.

In addition, it also refers to any soda drinks-flavored candy. People who love eating ramune candies will be reminded of their childhood when the candy could be found in any convenient local store. It has a distinctive soda flavor with a hint of sweet, sour, and a punch of fizziness. With that being said, it is the best-selling version of ramune candies that came from Morinaga, which is shaped identically like those classic soda bottles.

One of Japanese Ramune soda drinks most distinctive design is its glass bottle shape, known as Codd-neck bottles. They are described as hard to drink the first time, made of glass and sealed with marble. The marble is pushed inside the neck of the rattles and bottle around, giving Ramune soda the nickname “marble soda.” Recently, codd neck bottle have fallen out of fashion, making Japanese Ramune drink more unique.

How Many Calories Can This Soda Produce?

Each carbonated drink bottle has between 70 and 100 calories and is a perfect low-calorie frizzy drink for caloric intake. The candies contain about 45 kilocalories per bag. However, it is high in sugar content, so be careful and not finish the whole bag by yourself!

Ramune can help ease hangovers and the feeling of fragility. The secret lies in the glucose ingredient, which makes up about 90% of the ingredients in ramune. Other components include acidulant citric acid and potato starch. Although it is not scientifically confirmed that glucose gets rid of a hangover, it is known that glucose level is low when feeling fragile. It boost of glucose often helps to boost energy. Some ramune candies contain pure sugar rather than glucose; the difference is that sugar does not dissolve well in cold beverages. It is characterized by a stronger sweetness and an aftertaste of glucose.

What kinds of ramune sweet drink are available? There is a soda-flavored Hi-Chew, a popular Japanese candy adored soft and chewy by millions of people across the country. Hard candies mimic the sweet and tart effervescence of ramune soda. Also, there are cool treats like ramune-flavored ice cream, representing the coming together of two summer favorites. Many of them are offered all year long, but some are limited-time specials that indicate the start of summer.

This soda is intertwined with warm summer nights, and the glass marble clinking against the ramune bottle is a part of the season as the buzzing of cicadas or fireworks crackling. Even the color of its bottle is a particular shade of light blue that has the power to transport someone back to simpler times.

Ramune is popular with children, but it is also enjoyed by adults looking for the nostalgic taste of summer's past. Soda is often sold and bought at summer festivals that have become an integral part of these memorable events for many Japanese people. So, while in Japan, why not create some summertime memories while drinking some ramune?

How To Open Ramune Bottles

Since its introduction to Japan in 1884, ramune has reigned as the king of Japanese carbonated drinks! It is well-known for being a summer favorite in Japan and for having a cool bottle design with an integrated marble stopper. And drinking this soda is an incredibly entertaining Japanese drinking experience, thanks to the glass marble on top. Additionally, the codd-neck bottle prevents the marble from escaping, making it completely safe, especially for children. However, it can be challenging to open a bottle of Japanese ramune, especially if you've never done it before. Here's the step to open and enjoy ramune soda in no time! The aroma was that of fresh-cut fries. It had the same aroma as a bucket of freshly fried, golden potato strips. The flavor was present in every sip of the drink. The bottle's label's extremely precise characteristics hint that this was a parody of Nissin's well-known UFO brand of instant yakisoba. This Ramune Yakisoba had a strong flavor of spiced soy sauce with a laver-green undertone. The resemblance to a genuine UFO yakisoba was truly astonishing. UFO often has a powerful flavor, and this drink was no exception in its assault on the palate. Getting the matcha or green tea flavor is essential for capturing the authentic essence of Japan. The powerful ramune matcha flavor that comes through will spark a party in your mouth. It makes use of green tea's pleasant flavor as well as the classic ramune's lemon-lime foundation. Strawberry Ramune Soda Flavor has a delicious and lively mouthfeel and is quite sweet. It has a medium consistency and a strong strawberry jam flavor with undertones of lychee, Asian pear, and a hint of vanilla. Ramune does not hesitate to experiment with flavors that are out of the ordinary, aside from the sweet and relatively traditional flavors. The Crayon Ramune Soda is not one to miss if you want to explore new flavors.

With greater knowledge about the many ramune flavors, you should be able to pick one that suits your taste. You may certainly enjoy your drinking experience if you have the correct flavor in your possession. But wait, there's more. Ramune doesn't stop in drinks. There are also gummies and candies available! From Super Mario Gummies: Ramune and Cola to Pokemon Xylitol Triple Ramune Candy and Ramune Pellets. You can also visit the Sugoi Mart for more ramune drink flavors and sweets you'll surely love!