Often associated with New Years in Japan, the fukubukuro (ふくぶくろ) is a yearly tradition that many shops, businesses and department stores take part in. Fukubukuro also known as lucky bags are a mysterious sealed bags that are sold for a set price. They often contain products and goodies from the specific store or follow a type theme, like an anime. Usually the contents of the bag can be anywhere from slightly to significantly more expensive if you were to buy each item separately and at retail price. The lucky bags are exciting, thrilling and highly anticipated phenomena that get people lining up for hours to ensure they can get their hands on one. 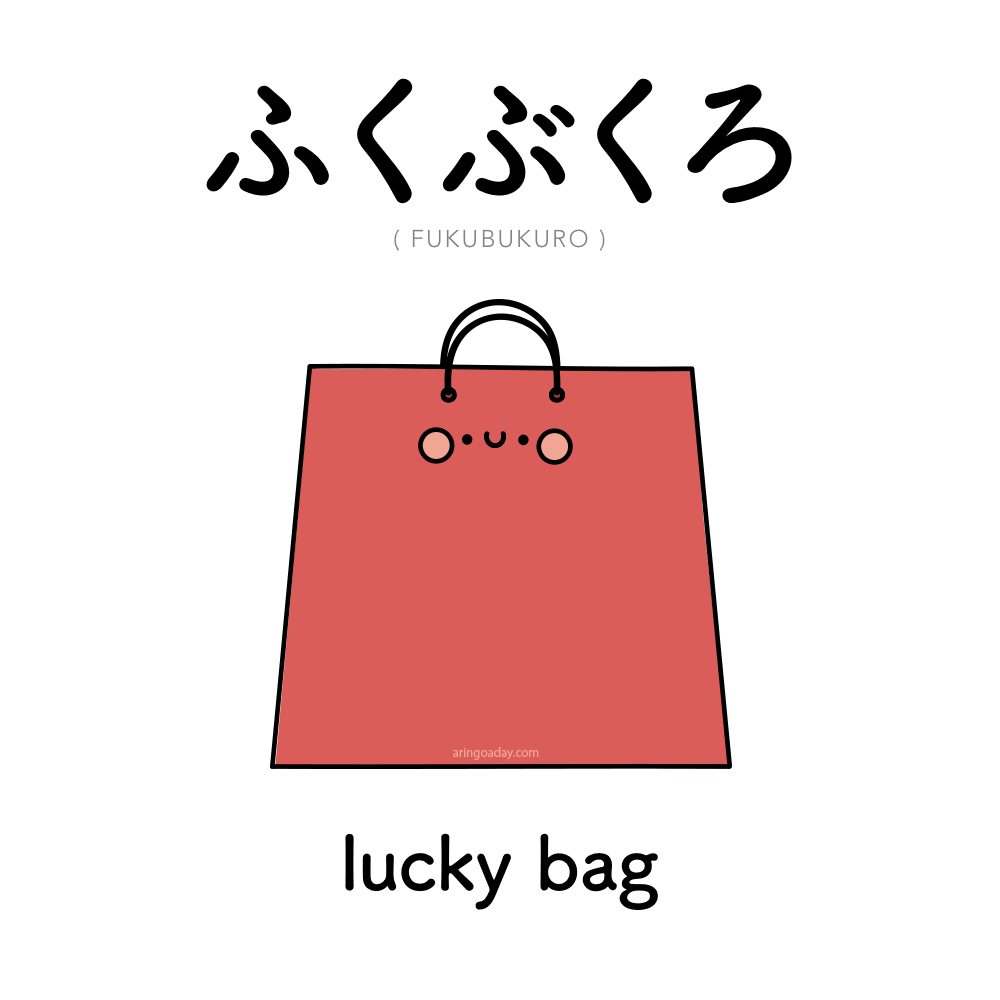 How did lucky bags start?

To understand how lucky bags came around, we have to first look at what the kanji means. In Japan there are three main alphabets, Hiragana, Katakana and Kanji. Hiragana is the phonetic set of characters unique to Japanese, Katakana is also a phonetic set of character words that is borrowed from other languages, and finally Kanji. Kanji originated from Chinese characters then adapted to the Japanese language and can be compared to as "pictures". Kanji holds major weight in the story of words. Even though phonetically two words may sound the same by having different Kanji's it changes the meaning of words.

So, let's break down what exactly fukubukuro means and where fukubukuro tradition comes from. Fuku (福) means good fortune or good luck, and fukuro (袋) means “bag”. However, when you put the two together, there is a slight change. Because it's difficult to pronounce the two "f"s together there is a change in the "f "in fukuro to a b: fukubukuro. Originally the fuku comes from the Japanese saying - “there is fortune in leftovers”. By following that saying it gives people living in Japan an opportunity to get a bit of fortune for oneself, while enjoying the rush of discount shopping, getting extra items. 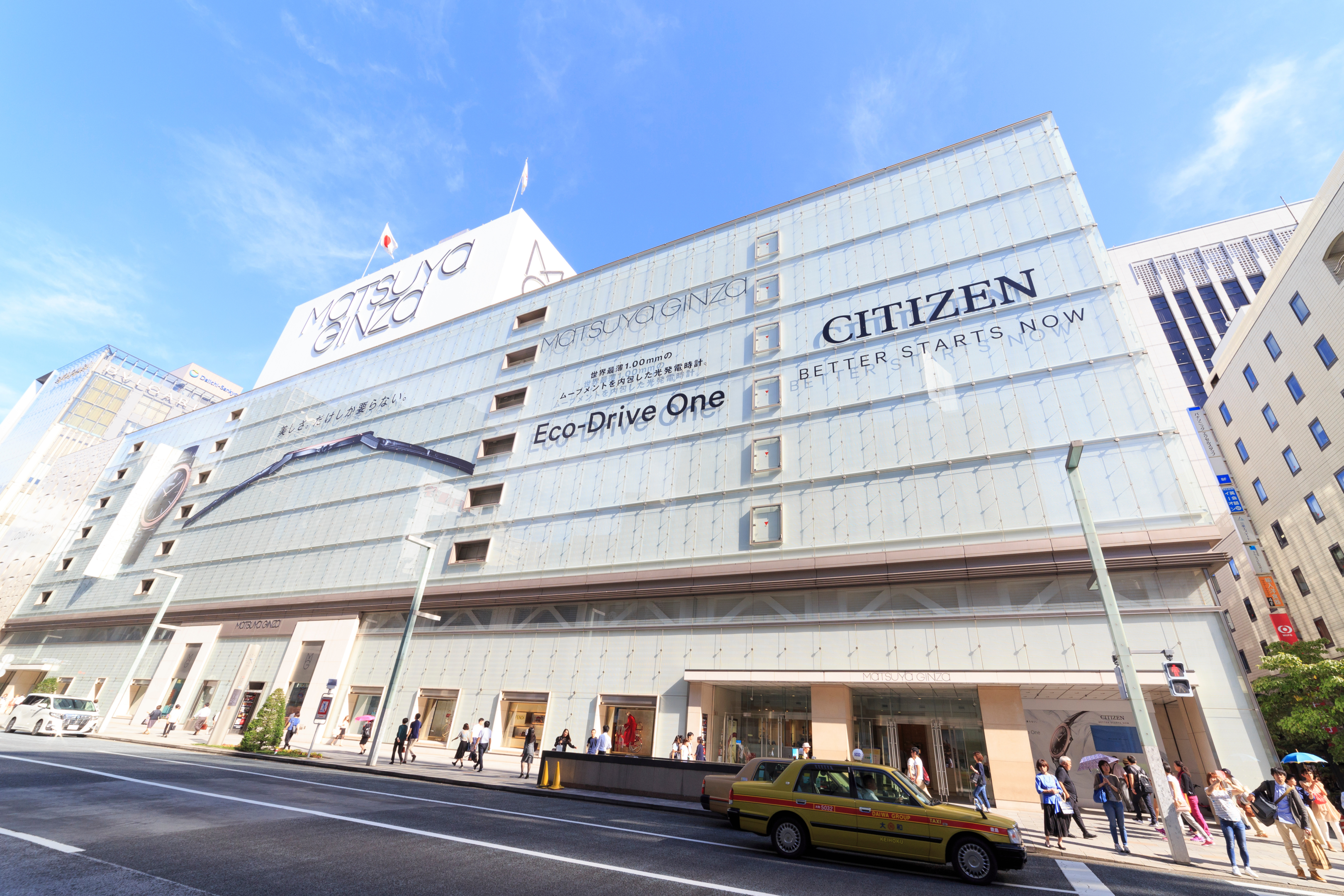 Although there isn't a fully clear story of the beginning of the popular fukubukuro, there are a number of stories that start at some department stores. One legend has it that the first fukubukuro originated in the Edo period (between 1603 and 1867) in Tokyo. The owner and merchants of the Kimono shop - Echigoya had the idea to prepare mystery bags in which he had placed a series of kimono fabrics at lower prices. These bags were so successful that the whole town followed suit, and then the rest of the country.

Although another tale suggests that the first lucky bag was invented by the Ginza Matsuya Department Store around the late Meiji period (around 1912) as a way to drive sales. One thing to note is that none of the original fukubukuro tales mention that lucky bags were exclusively for New Year's and New Year's day. In reality the truth of how the first fukubukuro lucky bag came is probably found somewhere in the middle of all of the stories. Although it's safe to say that at least by the Showa era, (1926–1989) if not earlier, is definitely when retailers and department stores caught on and started selling lucky bags and attract customers. 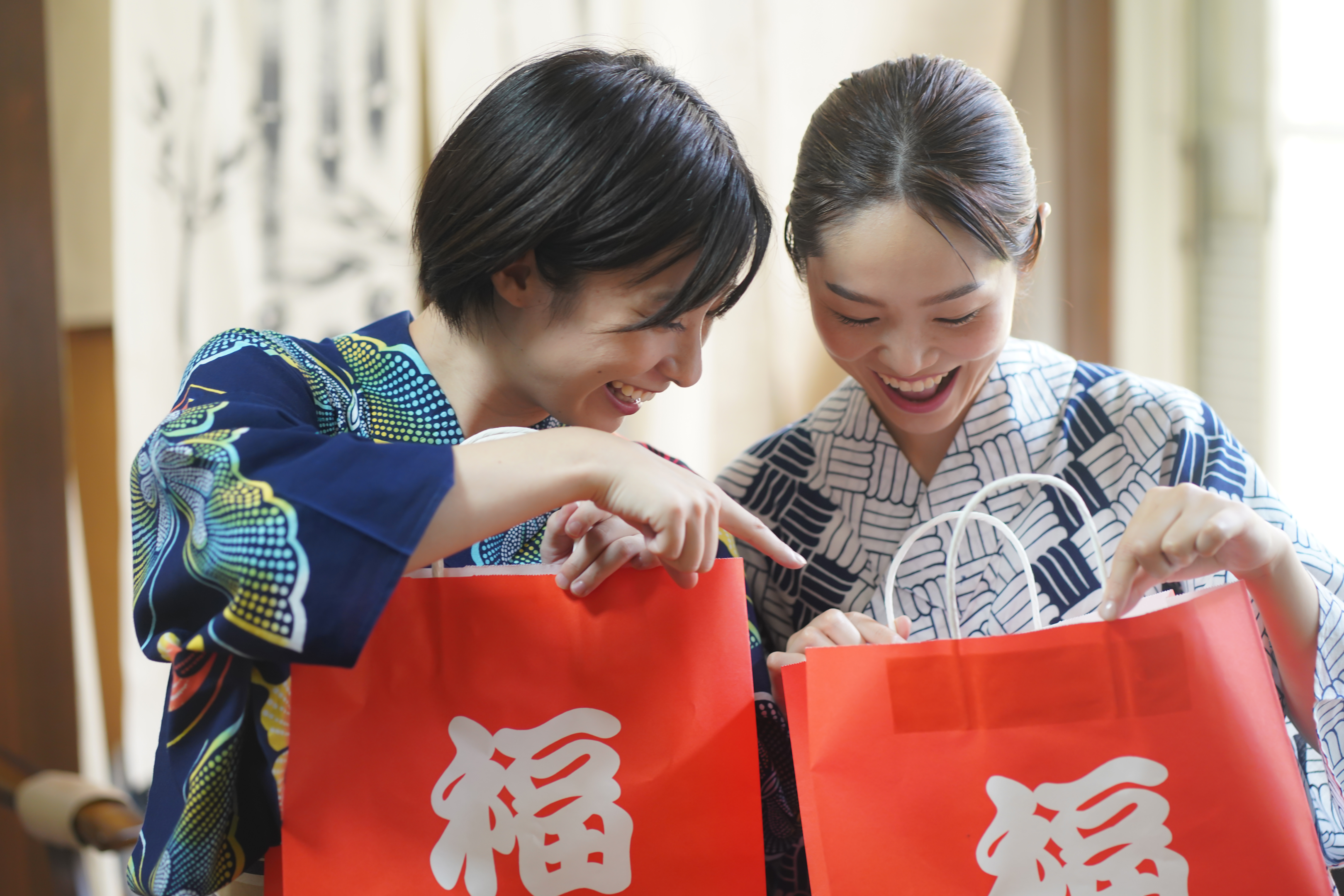 Fukubukuro lucky bags are for the most part sealed mystery bags sold for a set price. Ultimately you don't really know what you will be getting inside, which really lends to the hype and excitement around them. It's thrilling to see if you "win" in Fukubukuro, but in reality it's down to what each person wants out of the lucky bag that counts as winning.

However, to maximize your chances of “winning,” look out for fukubukuro that give you a sneak peek at what’s inside. Lucky bags like this will give you a general idea of what’s in them. Whether the items inside are based around a specific brand, clothing item, color, etc. In some stores they don’t even hide the contents of the lucky bags they sell! Often lucky bags have a substantial discount on regular items that you may want to purchase, so finding a Fukubukuro that best suits your interests is a win too! 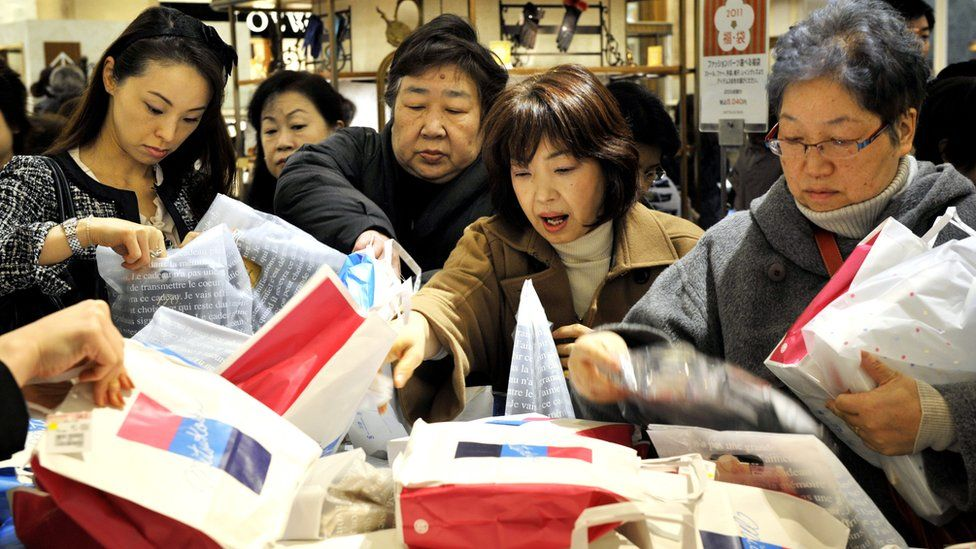 How to prepare getting a Fukubukuro in Japan

In Japan there are many stores that offer lucky bag sales, but it's no longer just specific to department stores. There are also luxury brands and luxury items that sell extremely expensive fukubukuro. For the most part businesses like Swarovski Crystal (jewelry store), Kinokuniya (food store) toy stores, Starbucks, Yodobashi Camera (Japanese electronics stores), and so many other stores sell reasonably priced lucky bags.

However, preparing for the logistics of getting a lucky bag in Japan can sometimes get a bit wild depending on where you go. Lucky bags are often a first-come, first serve basis. Places like popular shops, and high-end department stores, electronic stores and makeup stores often sell very generously packed fukubukuro, making them into an even higher demand. You can probably expect to see hundreds and even thousands of shoppers eagerly waiting in line to get their lucky bags, so make sure to arrive early if you want to be apart.

Traditionally New Years is a public holiday across the country, and with that lucky bag sales officially kicking off on January 1, but some stores don’t begin their sales until January 2. So make sure to do your research and write down the dates of the stores you would like to visit. Be prepared for some stores may only sell a certain amount of lucky bags per day, other stores might even offer the option to order a bag online to pick up later in the store. Or a store may only have a reservation system that would require you to buy or reserve the lucky bag a while in advance.

So, make sure that you are keeping up to date with the stores websites, social media accounts and monitoring the hashtags on social media like #福袋 or #brandname. Whether you decide to take part in the thrilling gamble, and spend weeks before New Years planning out which stores to hit, or whether taking a stroll around shop districts like Harajuku it really is a wonderful and enjoyable tradition to do every year. 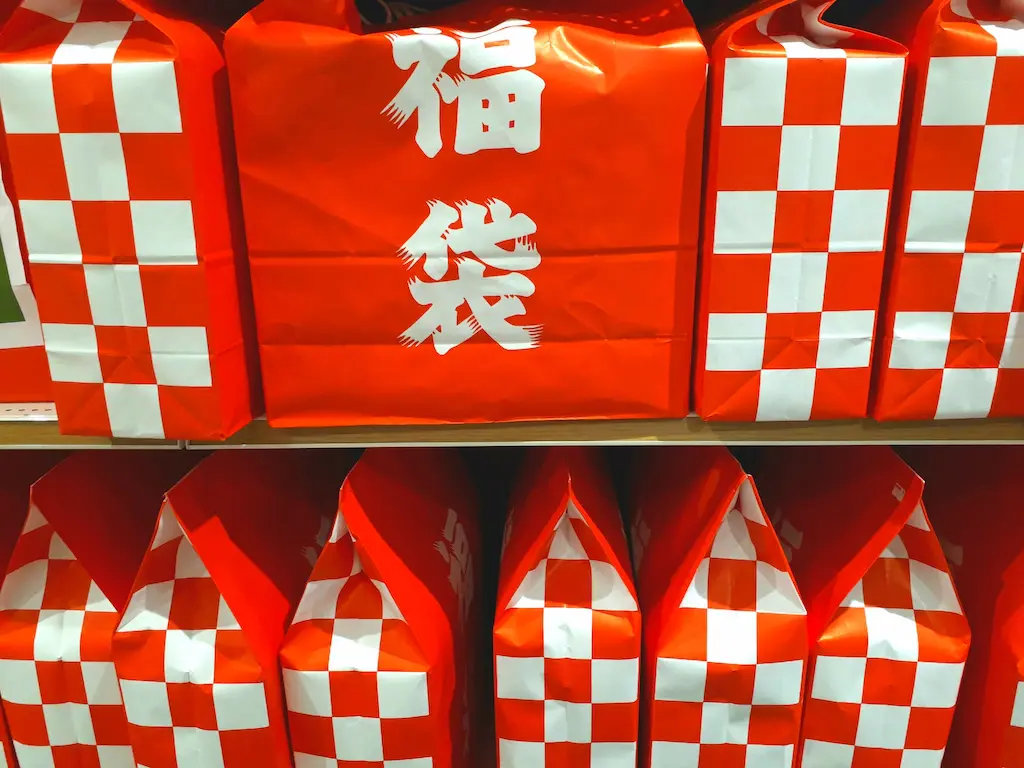 Different brands create the grab bags to entice shoppers and make space for new incoming stock but it's also turned into a fan fair where other customers can trade items and share their own unwanted items for something.

Depending where you get your lucky bags from you can snag discounts on clothes, concert tickets, jewelry, necklaces, sweets, electronics, food, anime merchandise, makeup and so many more other different items.

However, over the years though the traditional sale of the lucky bags has altered, instead of just staying within the regular brick and mortar stores, fukubukuro has started appearing online and on site too. Purchasing fukubukuro online has become an accessible way merchandise can be sold without having to queue for hours on end. Which is great especially if you aren't in Japan but want to enjoy Japanese tradition and Japanese products. 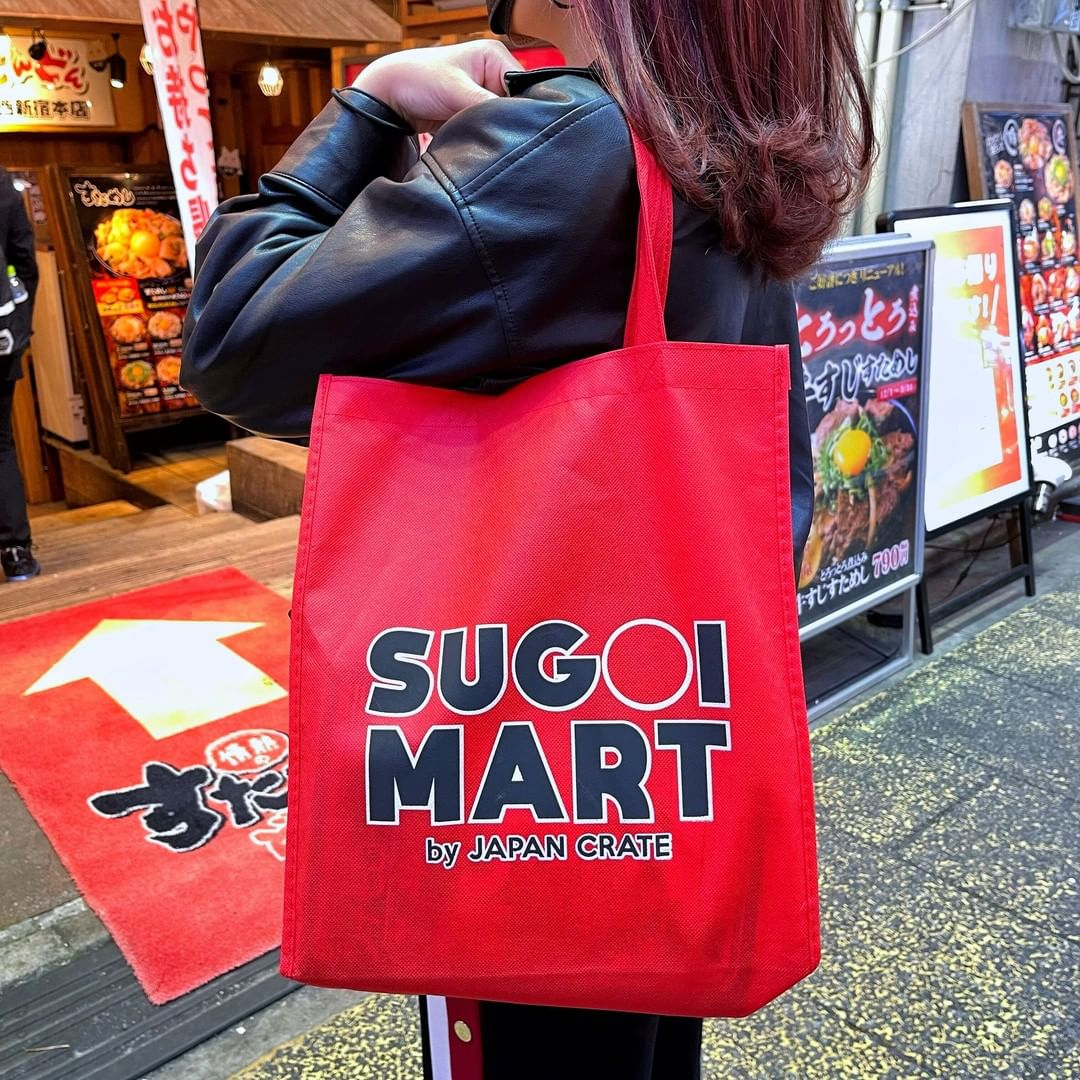 The best thing about lucky bags

If you want to get in on this phenomenon, but you're not in Japan and it's not January 1st, then Sugoi Mart can fix that. Sugoi Mart Lucky Bags come in a variety of themes that will fill all of your Japan, anime, kawaii and snack dreams! They are uniquely packed with exclusive and limited items that most bags may not have access to. Check out all the specialty items below: 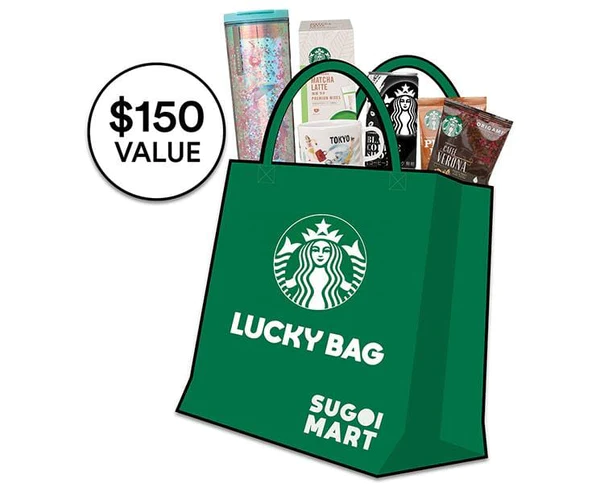 Japan loves Starbucks. So it makes sense to have a whole bag dedicated to the delicious coffees, teas and collectible mugs, cups, tumblers and gift cards. The Starbucks exclusive items are incredibly and uniquely Japanese designs that can' be found anywhere else in the world. Grow your collection and love for Starbucks with the Sugoi Mart Starbucks Japan Lucky Bag. 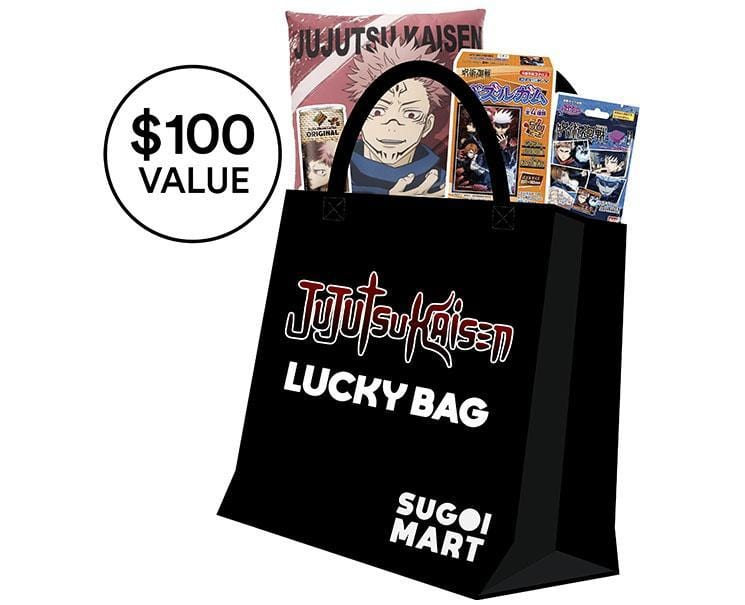 Jujutsu Kaisen is a Japanese anime and manga series that has taken the country by storm. With Japan only items available like puzzles, key chains, blind boxes, snacks and candy you won't be able to find in any regular shop. The Sugoi Mart Jujutsu Kaisen Lucky Bag is your gateway into exclusive and exciting merch that is worth over $100 retail price. 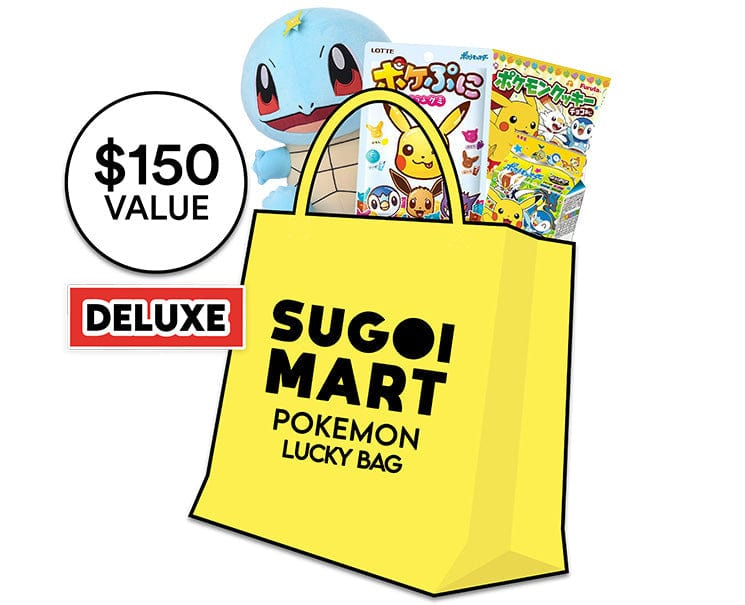 Pokemon has been around since its invention in 1996 in Japan. And the video game turned anime series, turned manga series turned nostalgic dreams has an array of merchandise that will set off your inner child with delight. You can score 10 Pokemon collectible items in the Sugoi Mart Deluxe Pokemon Lucky Bag with items like large plushies, figures, blind boxes, candy and home goods. Before you know it you'll have your own Pokemon gym set up, all with exclusive items. 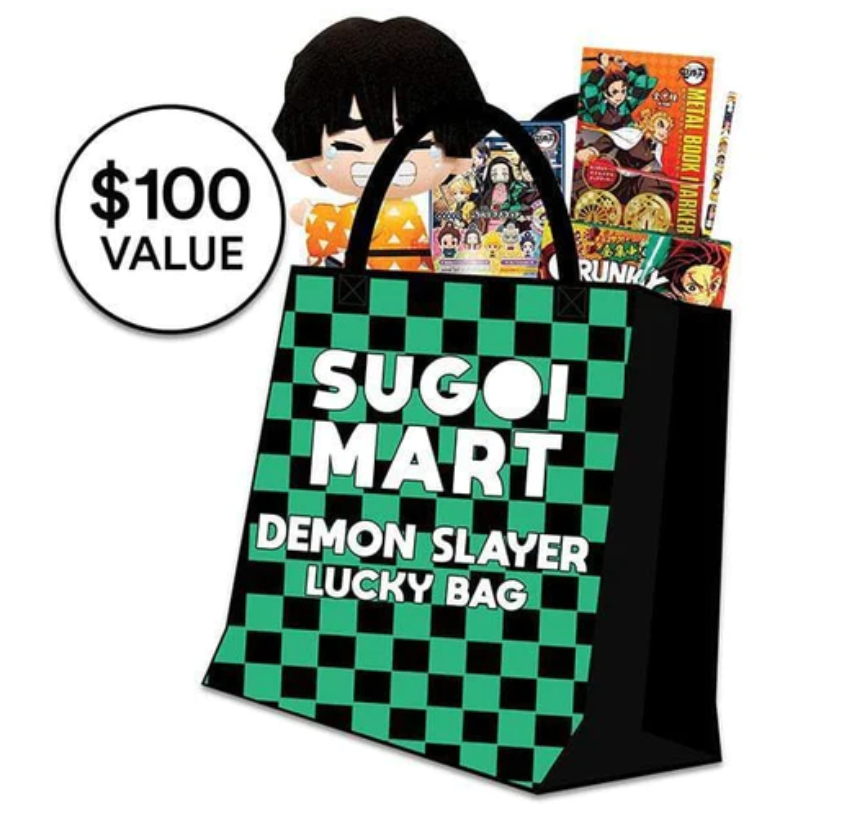 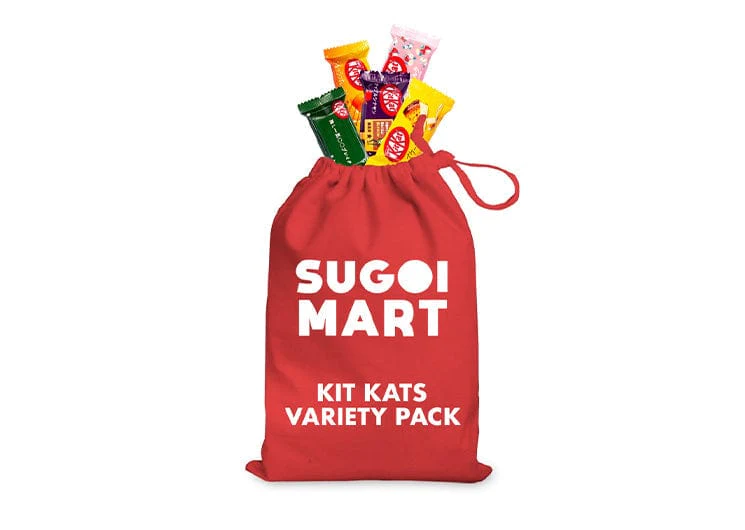 Kit Kats in Japan have tons of different exclusive flavors and amazing packaging. Ever wanted to try them all? Sugoi Mart is here with a brand new Japanese Kit Kat Variety Pack, where you can try 20 different Kit Kat flavors in one pack! This pack contains 60 individual pieces of Japan Kit Kats in total, consisting of 20 Japan exclusive flavors!

It's not only Kit Kats that have exclusive snacks, you can discover a plethora of Japanese chips and brands with the Sugoi Mart Chips Variety Pack! Each pack will include five different bags of chips, brands, and limited flavors of chips that are popular in Japan. Well known and loved brands like Pringles, Doritos and Cheetos. 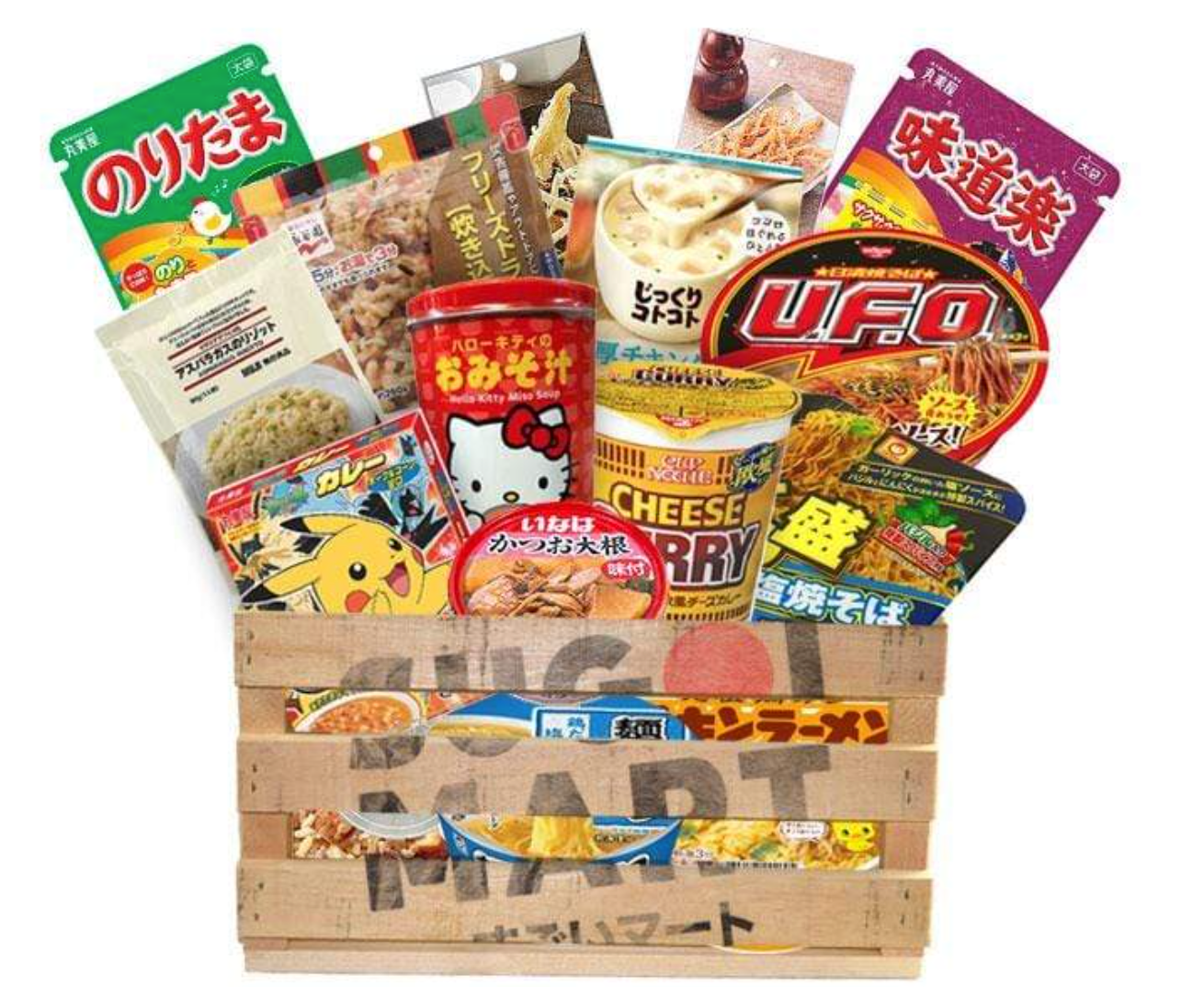 Have you ever wondered what you would do if every supermarket, convenience store and restaurant closed down? Well fret not, because Sugoi Mart has created the Sugoi Mart Survival Kit that can nourish your needs with delicious meal kits, full-sized instant ramen bowls, instant soups, flavored rice kits and even canned mystery foods. Why not try survival with a twist! 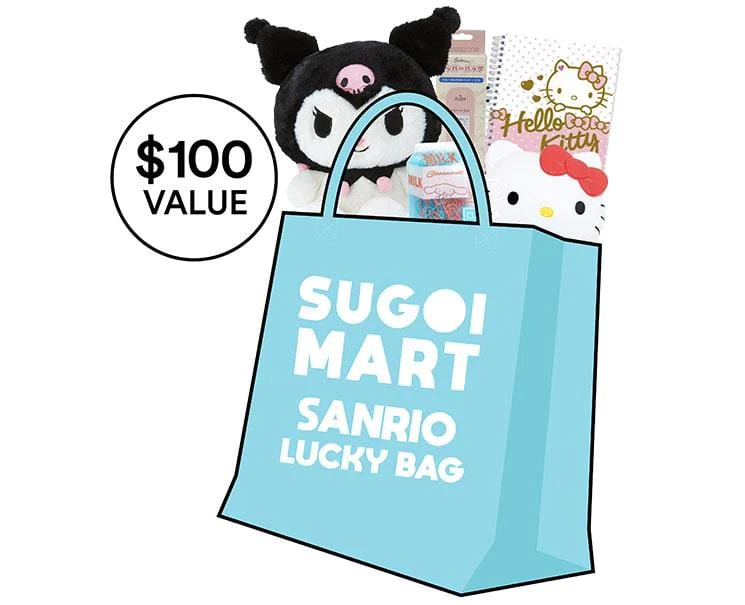 Sanrio is a wildly cute brand with a lineup of Kawaii characters such as Hello Kitty, My Melody, and Cinnamoroll. Sugoi Mart is here with this Sanrio Lucky Bag so you can get mysterious exclusive Sanrio items like Plushies, Utensils, Kitchen Tools and Stationeries.

If you're after something with a bit more randomness and Japanese essence then Sugoi Mart Gachapon Lucky is the one for you! With guaranteed 10 capsule toys per bag straight from the latest and greatest vending machines in Japan! Each bag has an $80 value and includes the possibility to get popular toys like Demon Slayer, Jujutsu Kaisen, Pokemon, Sanrio, and others. 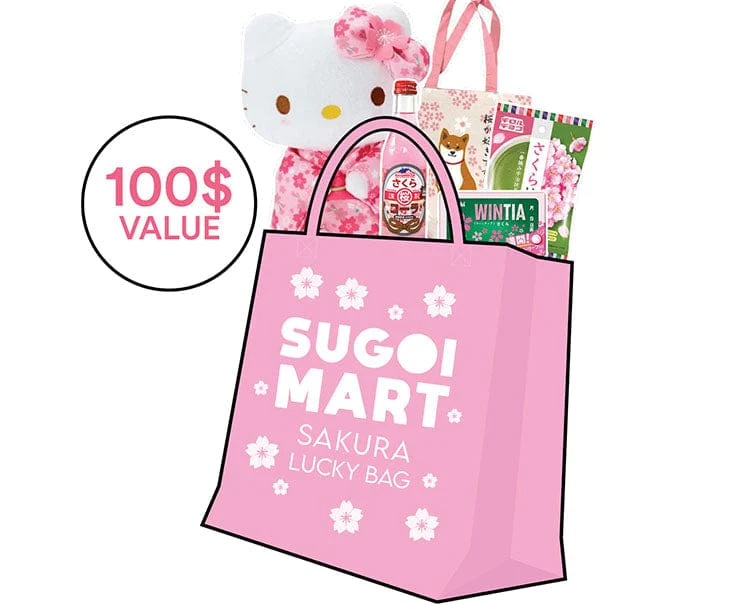 Now an extra special lucky bag, is the seasonal Fukubukuro. This type of bag is special because of the merchandise sold with the items contained in the bag. It's a perfectly planned bag that comes around every year during the unique seasons. Inside the Sugoi Mart Sakura Lucky Bag there is a range of stunning pink and green items like plushies, beauty, and cosmetic items. You even have access to sakura flavored items like teas, cookies, chips and chocolate. You get 10-15 of Japan’s best cherry blossom items in a super kawaii reusable tote bag. 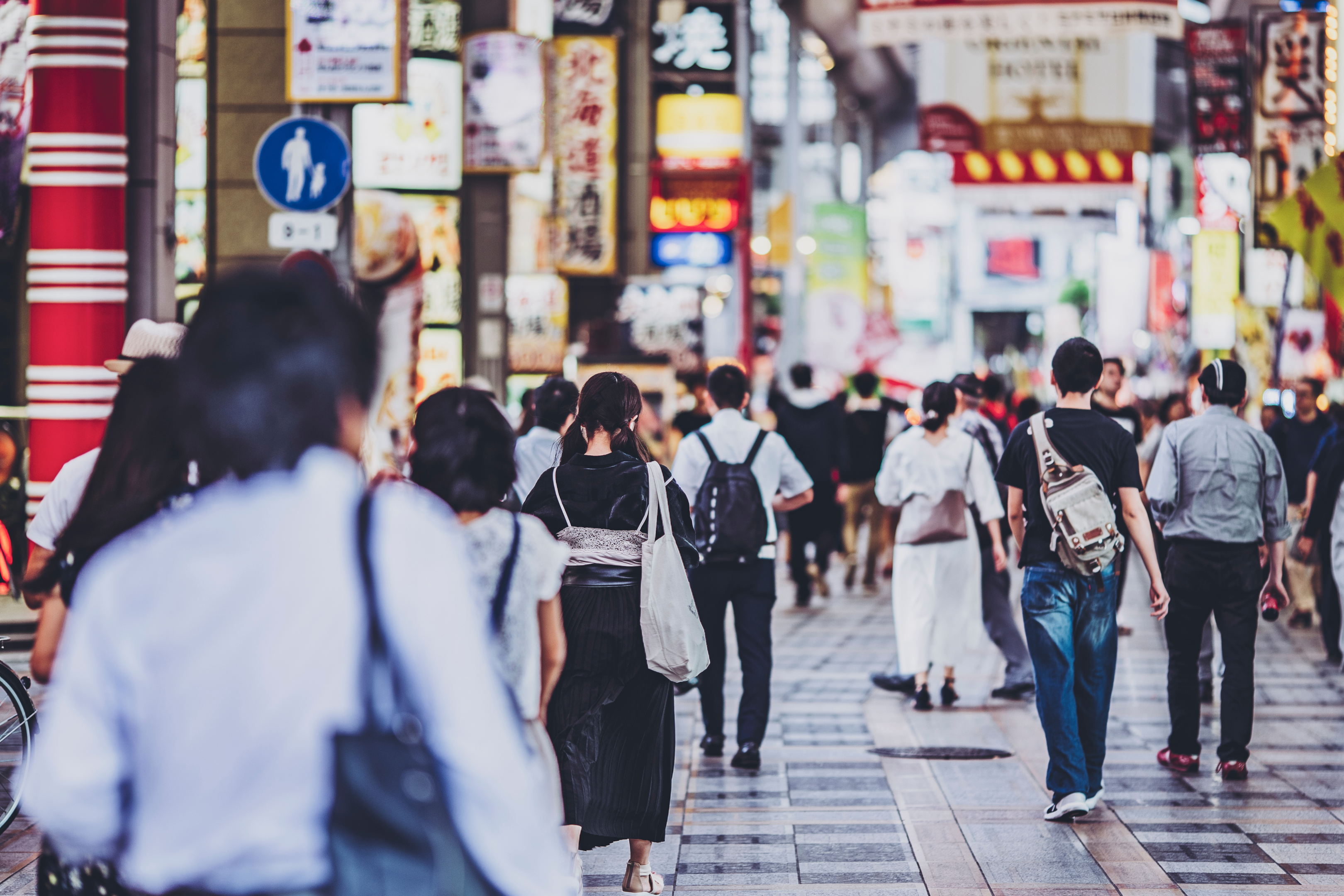 Join the tradition and get your own Japanese lucky bag

If you're feeling lucky, and want to hop onto this tradition then this is your chance! Sugoi Mart Lucky Bags are guaranteed to contain the minimum value, but select bags contain higher value items including grand prizes like gaming consoles and gift cards. Each bag is packed full of Japan-exclusive mystery items from snacks, drinks, collectibles, figures, toys, games, plushies, and more! Try your luck today!