With the incredible manga storyline, creative settings, and fascinating yet intriguing characters, there is no doubt that One Piece is one of countless people's most popular and well-loved anime in history. The interesting story revolves around the journey of Monkey D. Luffy in following his dream to be the Pirate King. Besides his goal, he is also popularly recognized as a rubber man that conquers the pirate seas. Being the holder of Gomu Gomu no Mi Devil Fruit, Luffy developed skills that made his incredible journey must-watched.

Since it began in 1999, One Piece has been a beloved manga and anime for over two decades around the world. Along with the other exciting characters, Luffy's fight and detailed storyline are well-remembered by countless people. In fact, One Piece's collections prove the anime's popularity. After all, it has inspired many anime fans worldwide, and it seems that it will not stop anytime soon. That sparks the query if there's better anime than One Piece or if it is the best in anime history. Figure out the answer below.

Top Reasons Why One Piece is the best Anime in History

Is it the best manga story and plot twist that engaged fans in the One Piece World? Surely, there is more than one reason. In the meantime, let's discover the top reasons why One Piece and no other anime is the best. Take a closer look at the important details below.

There are intriguing and specific rules in the One Piece World.

What makes the anime stand out among the others is its ability to attract viewers regardless of its complexities within the multiple manga storylines. Plus, Toei animation style manages to keep the viewers eager to see what comes next since the Vivre card was presented in the story. While it started as a typical piece of paper that Luffy received from Ace, the importance of the Vivre card was later revealed as a power that holds a person’s life force. As part of the story, the card contributes to rules and comical moments in the anime.

There's a lot of foreshadowing

Deducing the storyline while watching anime is common to viewers. As for One Piece, it left many viewers clueless even with plenty of foreshadow scenes, promoting the fans' anime thirst. Well, the way of presenting the essential pieces of the plotline is presented strategically and entertaining. 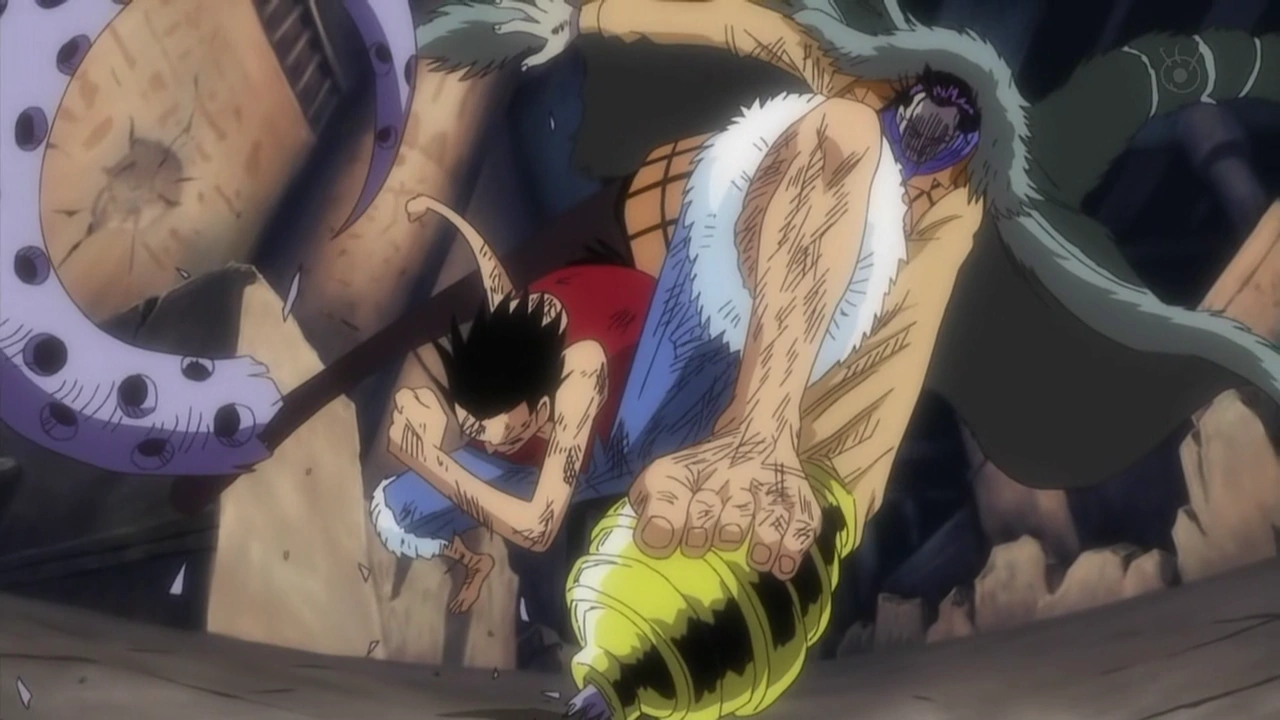 A notable foreshadowing is during the arc of Luffy's fight with Crocodile in Alabasta has user invisible armor. That's when Haki presented as ordinary blood, later revealed as a mysterious power that uses spiritual energy. Many more moments that made viewers feel wondered and amazed.

One Piece has less filler compared to other anime.

Each One Piece arc episode is worth watching since it impressively has less filler than other older anime back then and even with the new anime today. That's why it is necessary to give credit to manga artists. Greatly, they had a brilliant decision not to rush any episode just to quench the anime thirst of the fans.

In short, manga artists fight the pressure of popularity and the temptation to settle with unnecessary and insignificant plots. Hence, the anime's limited, almost unnoticeable fillers are given credit. Though it is not completely devoid of filler, the majority of the episodes are packed with must-watch scenes that are worth the wait. Moreover, the cover arcs produced in the manga, which concentrate on a number of supporting characters, correspond with the animated filler.

The characters have unique and interesting personalities. Some even sports character development.

Countless One Piece fans are deeply attached to their several favorite character. With that being said, it is safe to say that the intriguing identities Oda has created are not limited to a few. There's great passion and dedication noticeable in the beloved anime as many characters have unique personalities, and some even made it to the list of fan favorites. At the same time, it is greatly exciting to witness new characters development to some.

One Piece had a powerful plotline and presented several characters with strong unique abilities from specific devil fruit and creative techniques. Throughout its 23 years of run, the manga artists and Oda's writing introduced many favorite characters who are granted the devil fruits or person special abilities.

The World Building of One Piece is impressively exceptional and hard to beat.

The One Piece world-building is known as an endless and vast anime story. It's made up of innumerable villages and islands. Each Straw Hat pirate captain is from a different island, and their world becomes even bigger once they enter the Grand Line.

Oda uses creativity to expand One Piece's anime adaptation from the illustration of Punk hazard, whole Cake island, Wano, and Zoa. The best world-building fanbase has also discussed how each Straw Hats nationality represents corresponding countries around the world in real life. Ussop is said to be from Africa, Zoro is from Japan while Luffy is from Brazil.

One Piece highlights relatable issues in its storyline.

An anime is an entertainment medium, and it's inspiring to see manga writers use their platforms to bring attention to relevant issues. One Piece discusses racial discrimination, poverty, and political corruption through the Fishman, Royal Families, Marines, and Celestial Dragons. Fishman didn't trust humans, which is why prejudice is conveyed in their relationships.

As a result, they created laws to regulate their interactions. When Luffy was injured on Fishman Island, a blood transfusion was needed for him to survive. However, sharing blood with a human was not permitted. Jinbe disregarded this law and donated his blood to Luffy. The scene shows an emotional illustration when Jinbe's blood leaves his body while flowing towards Luffy. As he smiles, a voice announces, "If you hurt someone, or someone hurts you, the same red blood will shed."

The greatest anime has a story telling and is brilliantly detailed.

One Piece recently celebrated airing its thousandth episode. After two decades of animation, One Piece continues to impress fans around the world with its best story plot and extraordinary attention to detail. They are often surprised at the information they receive before understanding its importance. Oden's character demonstrated the intricacies of Oda's writing.

After seeing the events leading up to Akazaya Nine's long-awaited battle against Kaido, fans were impressed and amazed to see many new characters. However, Izou left Wano to prevent Oden from joining Whitebeard's pirate crew. In an ironic turn of events, he ended up staying with Oden to become a beloved member aboard the Moby Dick.

One Piece is a cultural phenomenon in Japan — the statues dedicated to the Straw Hat Pirates prove it.

One Piece is not just a beloved manga story or an anime of all time but also a cultural phenomenon. Fans of the series that live or visit Japan would find statues dedicated to the characters in the series. Moreover, there are 10 statues in Kumamoto, Japan, Oda's hometown. It's rare for anime fans to visit a space dedicated to their favorite characters.
There are statues of Zoro, Luffy, Chopper, Sanji, Franky, Ussop, Chopper, Brook, Robin, and Nami, which were last unveiled in January 2022. As the newest member of the Straw Hats, Jinbe’s statue will be unveiled in April 2022. Not only are these statues a vacation destination for fans, but visitors add them to the local economy.

The anime consistently wins the test of time.

One Piece premiered in 1999. Since then, it has become the best manga, with fans located all around the world. After airing incredible storyline for over two decades, One Piece is more exciting now than when it started.

Despite as the longest-running anime ever, One Piece has maintained its fans engaged in an incredible arc journeys with characters they love. Over the years, it became more entertaining and confusing. Many viewers still have no idea about the void century, the one piece, and the will of D. Fans made a long-term commitment with each arc plot twist. Resulting in viewers being devoted to a new Straw Hat member and a long-awaited battle.

Show your love to One Piece today!

For any One Piece anime fan, there is nothing more important than having something related to the favorite character's Merchandise. One can't ignore the fascination amongst the One Piece fans if they got to hold their favorite Merchandise from the universe of the world's popular anime. With a lot to choose from, we get a little dubious about what might be best to buy.

Fans also dislike having to purchase all the popular items from several vendors. Yet getting the finest piece of Merchandise on a single platform is something that One Piece fans can only dream of.

Look at the best One Piece Merchandise that you will love.

The huge variety of One Piece Merchandise is up for grabs. The items mentioned in this blog are just some of the few available. We have selected the best ones to make it easy for you to make up your mind. Take time to choose and find something to your liking.