Why is Demon Slayer Rengoku so popular?

Are you a fan of manga series, yaiba anime, yaiba movie, and yaiba manga? If so, we bet that you've heard about the popular Demon Slayer tv episodes. They also have series games for nintendo switch and entertainment district. 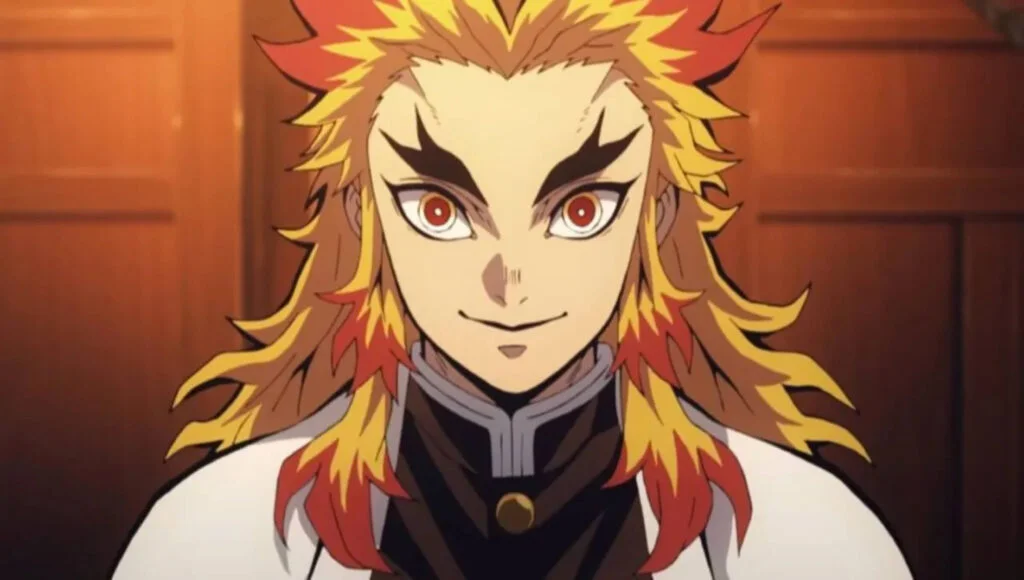 Demon Slayer has peculiar characters with incredible strength, skill, and presence. But, among this group of eccentric people, Kyojuro Rengoku still stands out from his colleagues due to his upright and exceptional bright personality. Yet, his fiery hair is also one of the biggest reasons he stands out. Additionally, the anime combat breathing styles of powerful swordsmen fight and transformed into great fighters in every new mission.

The majority of Hashira, decided to become Demon Slayers since they had experienced a terrifying demon attack. For that reason, a raging demon had claimed the lives of their loved ones. This happened to the Insect Hashira, Stone Hashira, Wind Hashira, and Water Hashira.  Their incredible power is fueled and motivated by extreme despair and anger. However, Rengoku is not at all like that. He didn't lose any family members to demons. But what led him to become the Flame Hashira?

The Appearance of Kyojuro Rengoku 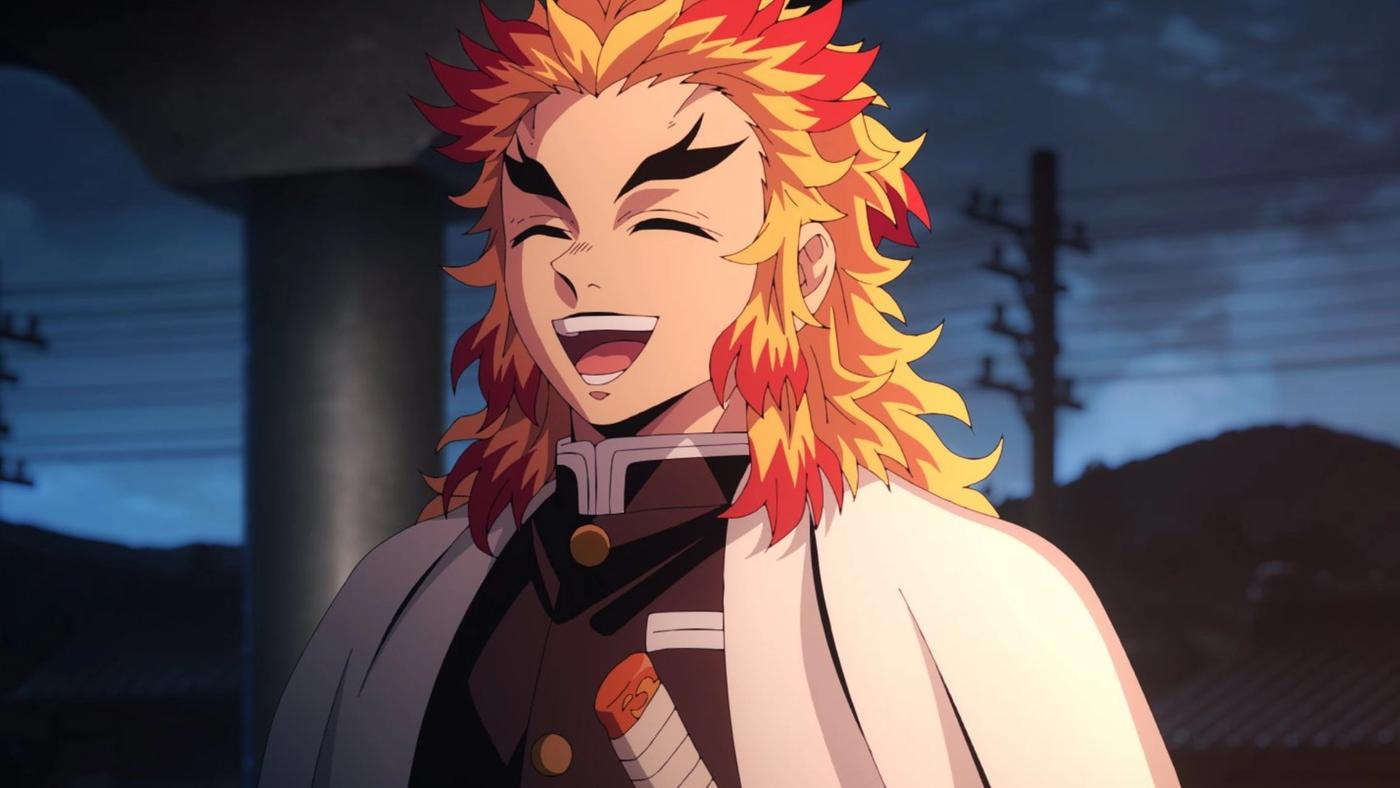 Kyojuro is a tall, muscular young man. The most remarkable feature of his appearance is his brilliant yellow hair, which has long strands and occasionally turns red. His bushy, parted eyebrows and wide open eyes are also identified as his assets. Others signify it as a blood demon art.

Kyojuro wears a dark, lighter variant of his traditional cloth. On the top of the uniform, Kyojuro wears a haori with flame-like designs and protrusions on edge. It was used by his dad Shinjuro and utilized by his predecessors. The feet of Kyojuro are covered with a pair of white Zori with red straps and a pair of tabi socks in red with yellow flames shooting upward from the bottom.

The Personality of Kyojuro Rengoku

Kyojuro is a trustworthy and kindhearted boy. He is the potential to express his feelings and is quite quirky. However, he also possesses a persistent enthusiasm and amazing bravery that was instilled in him by his mother when he was a young boy. It helps him to be resilient and dedicated in trying circumstances and to uplift those around him.

Kyoujuro diligently performs his responsibilities as a Pillar and Demon Killer. He is a person who believes that he has to protect the weak that his mother has given him and learned from his father the responsibility for the power to defend the vulnerable death and two demons. Through his education, he acquired the strictness and aggressiveness of his father as a Japanese.

His father, Shinjuro Rengoku, served as the Flame Hashira for a long time before Kyojuro took over. Considering that the Flame Hashira has passed from the Rengoku bloodline for decades, it is not only restricted to this father-and-son pair. While Yoriichi Tsugikuni, the first demon slayer, taught the first head of the Rengoku family how to use the Sun Breathing method, which he later modified into the Flame Breathing that would be passed down from one to another next generation.

Kyojuro, the present Rengoku family's eldest son, is responsible for upholding their traditions. Not to mention that Senjuro, his brother, lacks the physical skills necessary for good use of Flame Breathing. Kyojuro's only real option is to devote his life to learning the ways of the flame swords and become the next Flame Hashira. This includes the grim reality, peaceful life, sole survivor, and blissful life as a demon slayer kimetsu in the battles like hinokami chronicles.

Tanjiro Kamado awakens with Kyojuro and his fellow Hashira in this episode. 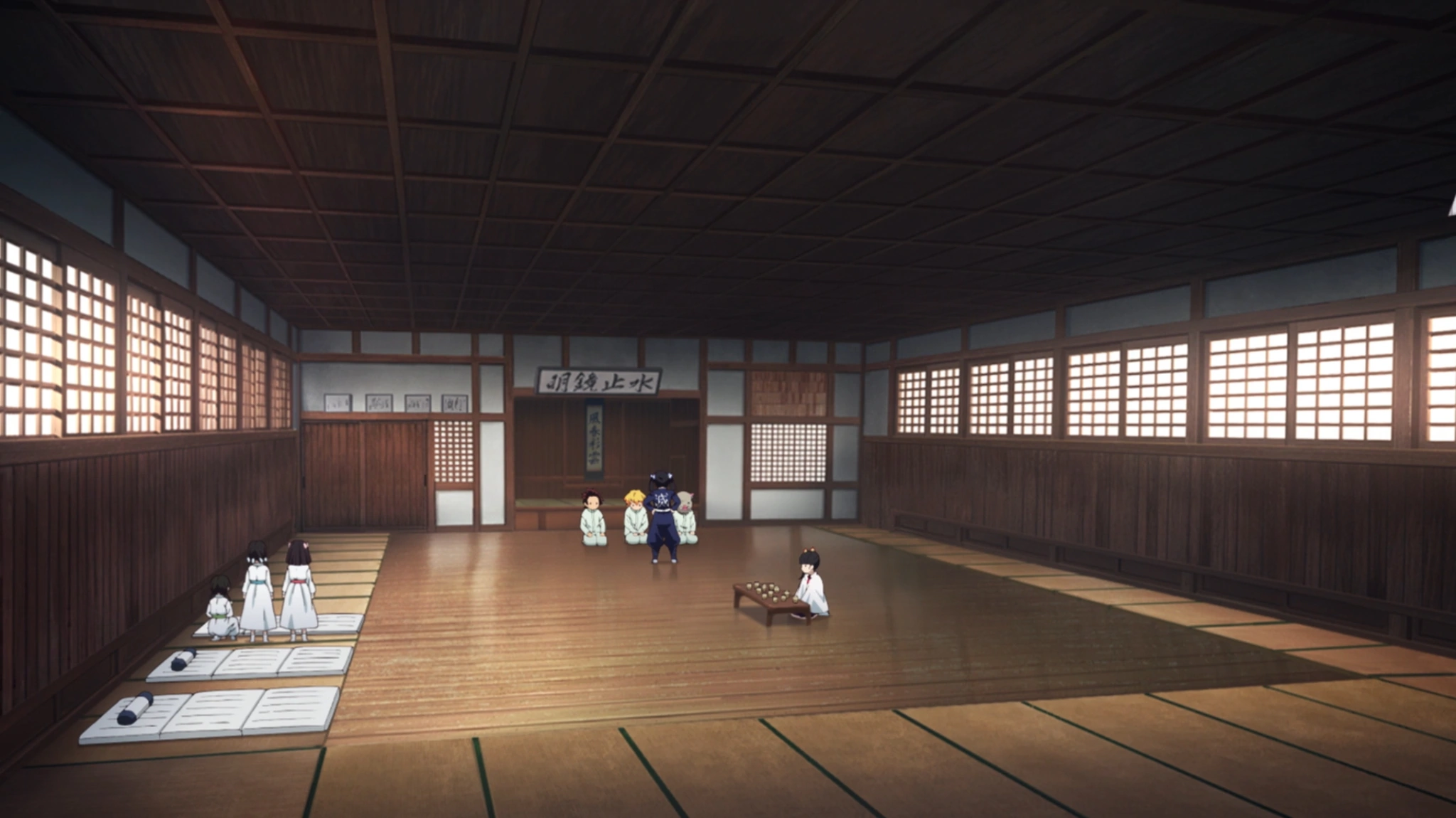 Shinobu Kocho points out that Tanjiro is facing charges. It is when Kyojuro does not consider it necessary since Tanjiro learns to broke the law by protecting a Demon; he claims they should have handled the situation independently. He subsequently concurs with Gyomei Himejima's plan to assassinate Nezuko Kamado. It witnesses Tanjiro having a coughing fit while remaining silent when Mitsuri Kanroji asks if they need to handle their subordinate's trial without consulting Kagaya Ubuyashiki. Afterward,  Kyojuro stares at Mitsuri when she chuckles with a neutral expression after Tanjiro resolves and whacks Sanemi Shinazugawa. 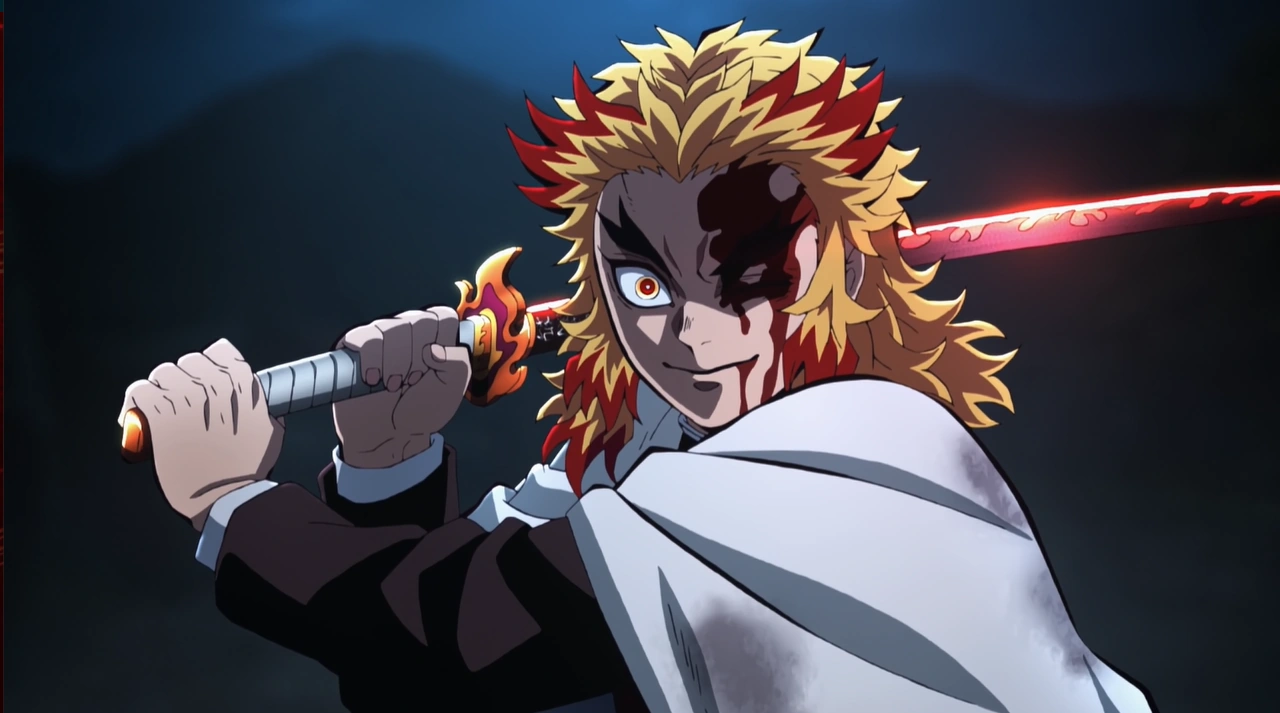 Kyojuro is asked to look into a series of brutal attacks affecting a small community since he thinks they are connected to the incident involving the disappearance of 40 people from the Mugen train. At a ramen cafe, he meets with another demon slayer, and they talk about their next battle of action. When he learns that the Mugen Train has been taken out of service and is being kept at a repair facility, they eat dinner and go to a local railway station in Japan.

Afterward, they encounter a young girl, Fuku, saddened by the lack of customers buying her bento boxes as the news of the attacks scares everyone into staying inside after dark. She violently hurls her bean bun and responds that demons don't exist when Kyojuro admits he is searching for a demon. However, he is unaffected by her sign behavior. Fuku apologizes and asks if he'd like to buy some bento boxes after being comforted by her grandmother. He gladly purchases them all and gives his friend the items while directing him to get back to the Demon Slayer Corps. The Bentos will be great presents.

The promise Kyojuro made to his late mother, Ruka Rengoku, is important in his will to become the Flame Hashira. Ruka was a lady with a strong sense of right and wrong. She is adamant that powerful persons should protect those who can defend themselves.  She wanted to instill in her sons the value and way of life.

Unfortunately, Ruka had a fatal illness and died before Kyojuro could turn into a Hashira. But even as she died, Ruka urged her son to preserve that noble goal. Kyojuro pledged to his mother at the moment that he would do all his ability to assist as many people as possible. The only thing that keeps the flame alive in his heart, no matter how challenging the circumstances may be, is his vow to his mother.

The Main Characters in Demon Slayer 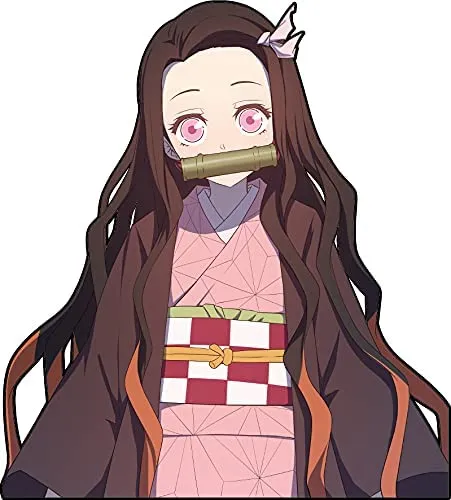 The series' main story is about Tanjiro trying to get her sister back as a human. That is why younger sister Nezuko roles in the series is important. It's almost similar when Nezuko is an anomaly among demons, and the gear begins to move. 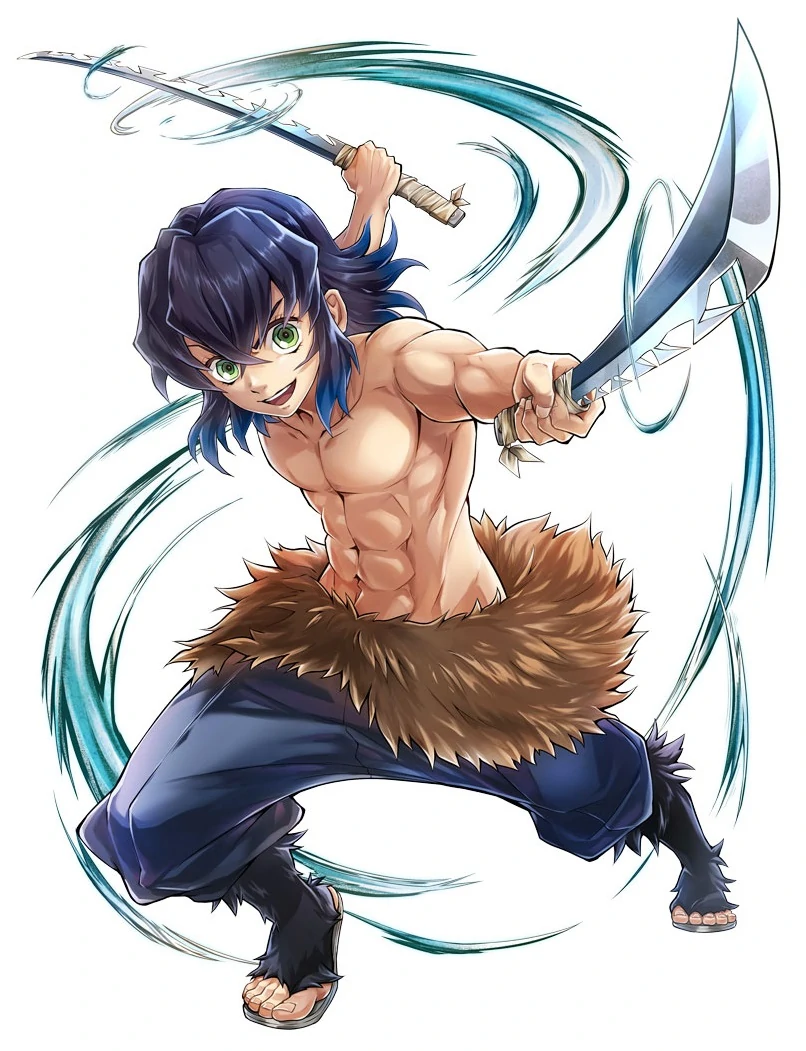 Inosuke's character development started as a decent human being with a little lunacy. You might be able to see him as a "normal Inosuke," even though it may bore us because this Inosuke is incredible. 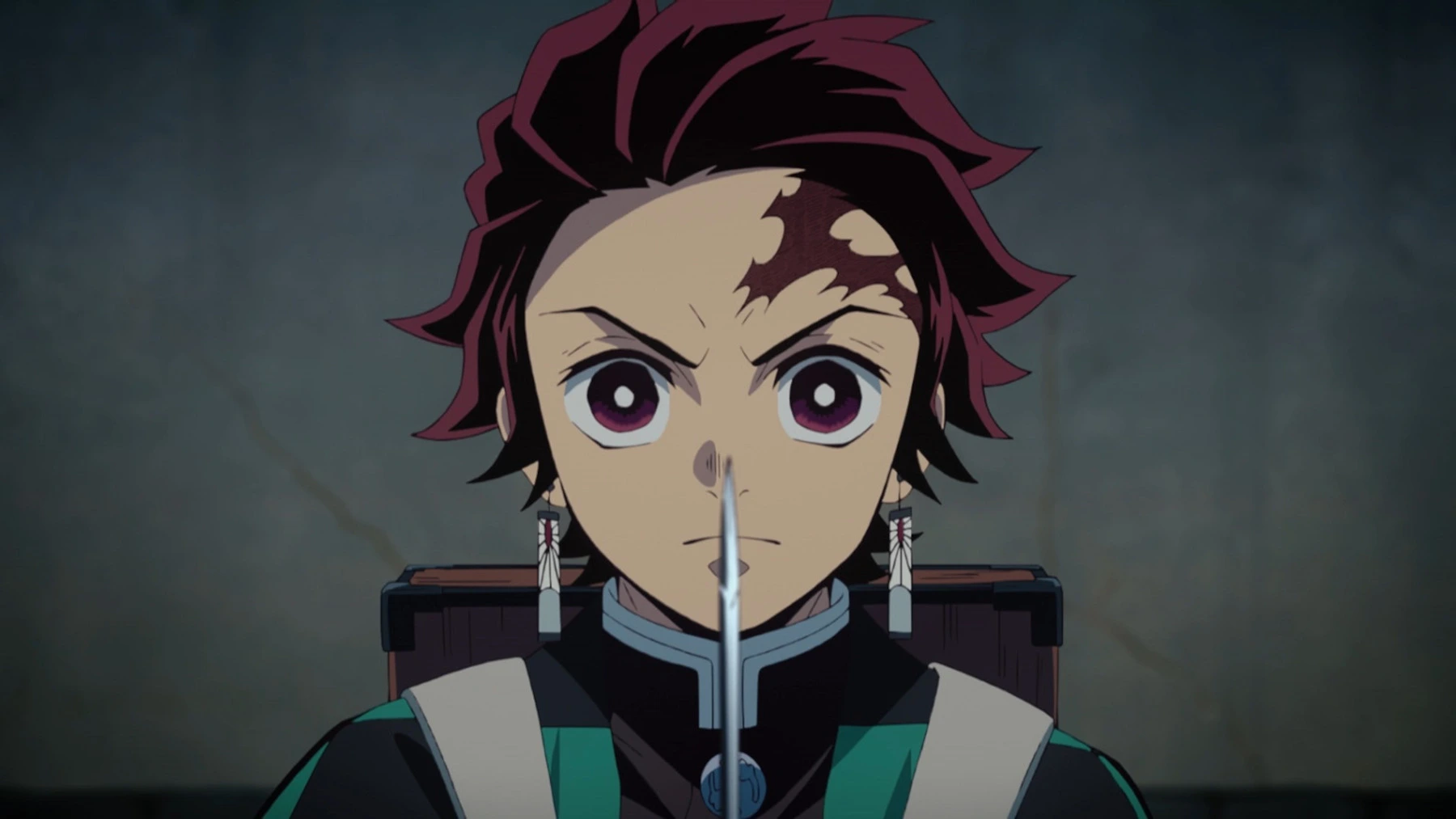 It is obvious why Tanjiro was chosen as the top character on this list. One of the prominent male characters in Shounen's anime is Tanjiro. It's almost impossible not to be surprised by his belief, motivation, and personality that it rarely gets boring to watch. 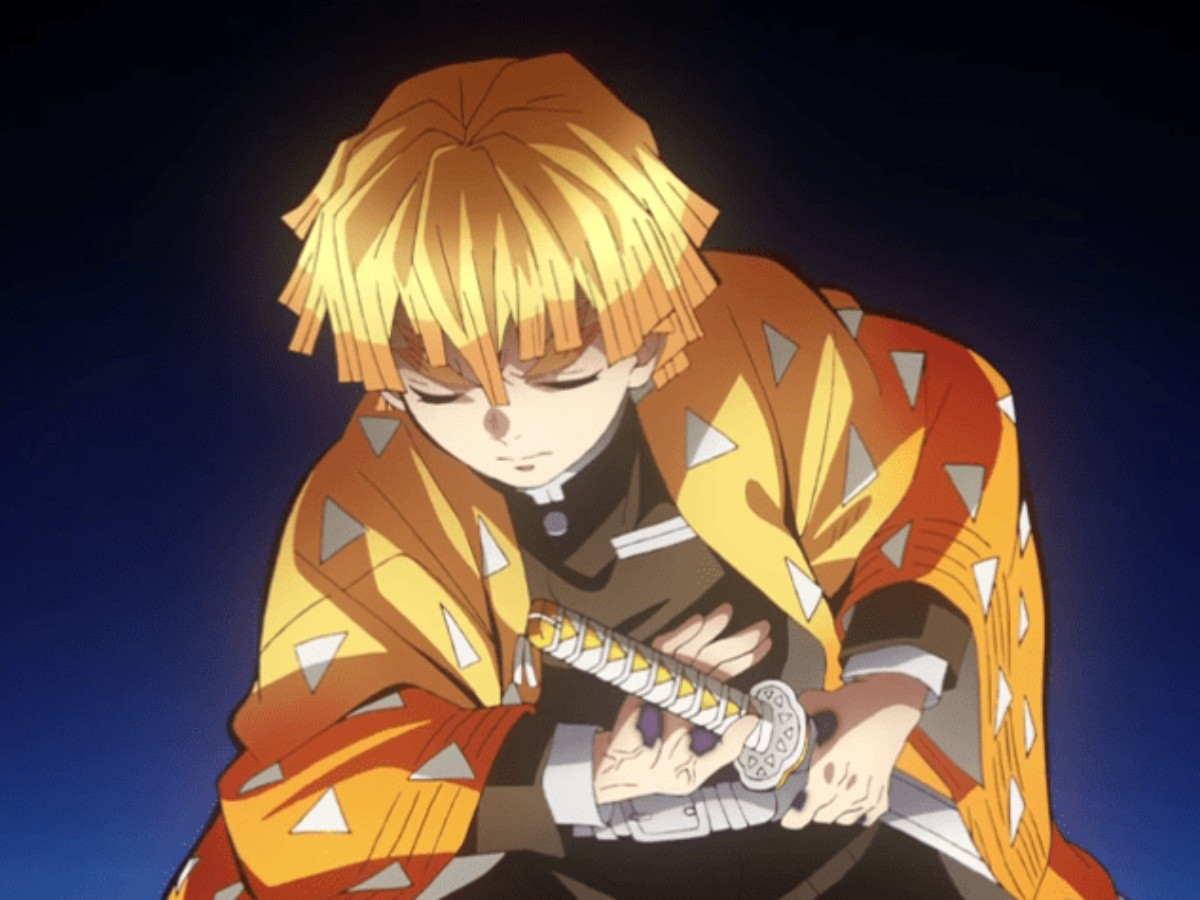 Zenitsu Agatsuma is one of Demon Slayer's main protagonists: Inosuke Hashibira and slayer Kimetsu no Yaiba, traveling companions of Nezuko Kamado and Tanjiro Kamado. He is a Demon Slayer in the Demon Slayer Corps in kimetsu no yaiba manga.

For more Demon Slayer collections, you can click here to browse other products.